In April of 2019, an asleep-at-the-wheel motorist drove straight into Madison and Dean Weaver’s Belleville home. This careless act spiraled into an ever-expanding headache which included lengthy disputes with insurance companies and another contractor.

“Our homeowner’s insurance was just horrible. They were fighting us on everything. They wanted to fix it for dirt cheap and not up to standards, codes and what it should have been,” Madison said. “They wouldn’t deem our home as unlivable, either, because the bathroom and the kitchen were still functional, but the air conditioning didn’t work all summer and having a giant hole in the dining room wall was an awful way of living.”

Additionally, the Weavers’ public adjuster recommended a different contractor — one who didn’t live up to their expectations — before they took matters into their own hands to partner with Josh Smalling Roofing and Restoration.

“The contractor wasn’t very honest or understanding, trying to wring us for every penny and every day he could,” Madison said. “We ended up paying a pretty penny out of pocket to break our contract so we could work with Josh.”

Josh Smalling’s vast experience with insurance restoration and remodeling was a welcome relief for the Weavers.

“Josh was always offering to make calls and do whatever he could to take the stress off of us,” Madison said. “He referred us to legal counsel to help us fight the original contractor who tried to sue us. Josh completely helped and saved us in so many ways. He’s so well-rounded. I never would have expected that from dealing with previous contractors. They wouldn’t have even touched those sorts of things.”

Once the Josh Smalling crew got to work, the interior and exterior of the Weavers’ damaged dining room, entryway and basement were fully restored and like-new in less than two months’ time.

Time was of the essence for the Weavers, who had since moved out and into a new home and wanted to avoid an extended period of paying bills on two houses.

“Josh and his crew were amazing,” Madison said of the construction process. “I don’t know how they did it so efficiently and quickly, but it was absolutely wonderful. Every time I would drive by the house, there were at least five or six people working hard. It really impressed me that he was thinking about us and our situation and not just about the money.”

The Weavers’ situation was an unfortunate one, brought on through no fault of their own, leaving them with unfair stress and headaches as they dealt with inadequate support and red tape brought on by their own insurance carrier.

In the end, Josh Smalling Roofing and Restoration was able to return the Weavers’ home back to — and beyond — its former glory. We were happy to provide some welcome relief to a couple understandably fed up with the insurance restoration process.

If your family ever finds itself in a similar situation and in need of an experienced insurance restoration contractor who will have your and your home’s best interests at heart, make Josh Smalling Roofing and Restoration your very first call. 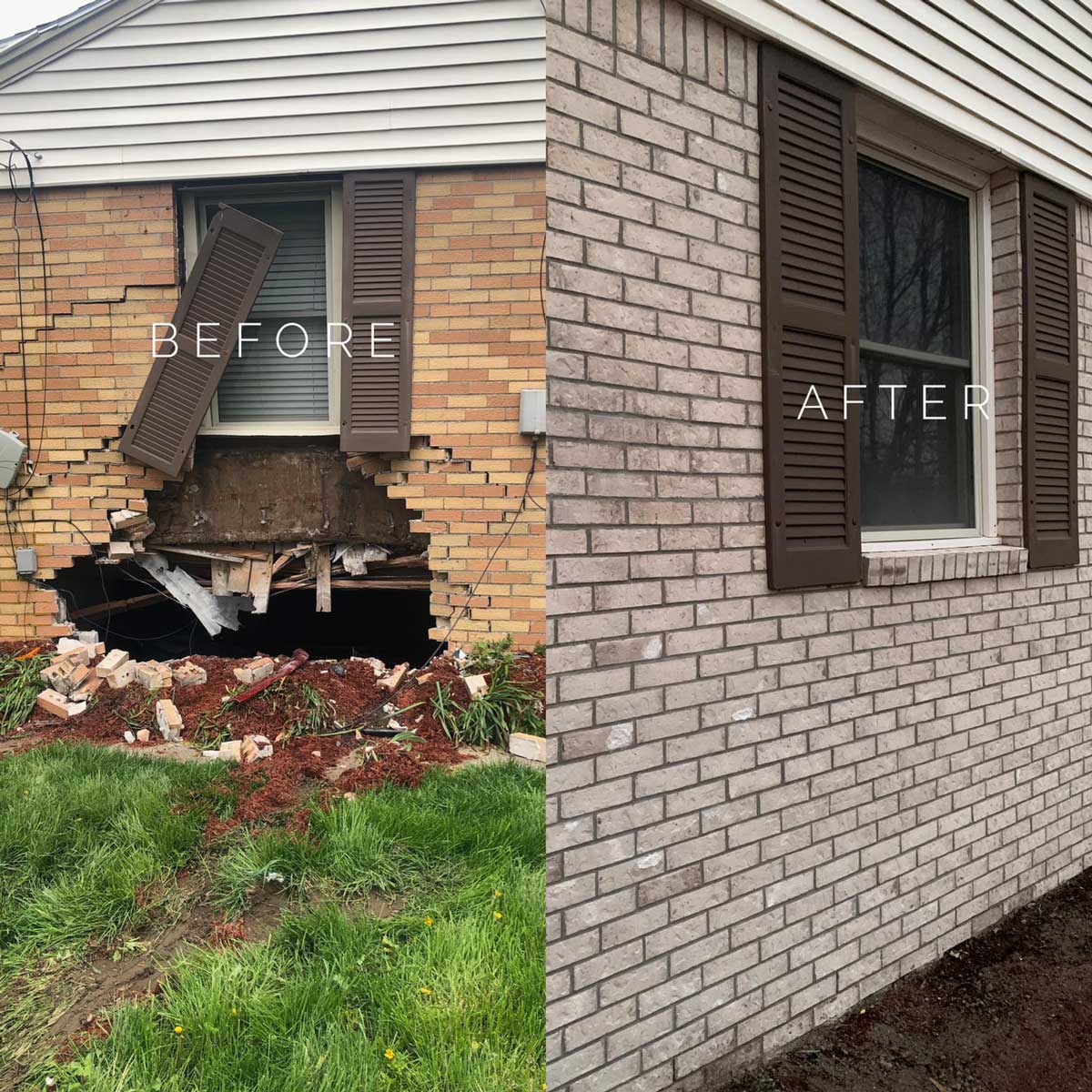 Repairs and replacement to exterior brick wall and structural foundation

“Josh and his crew were amazing. I don’t know how they did it so efficiently and quickly, but it was absolutely wonderful. Every time I would drive by the house, there were at least five or six people working hard. It really impressed me that he was thinking about us and our situation and not just about the money.”
-Madison Weaver 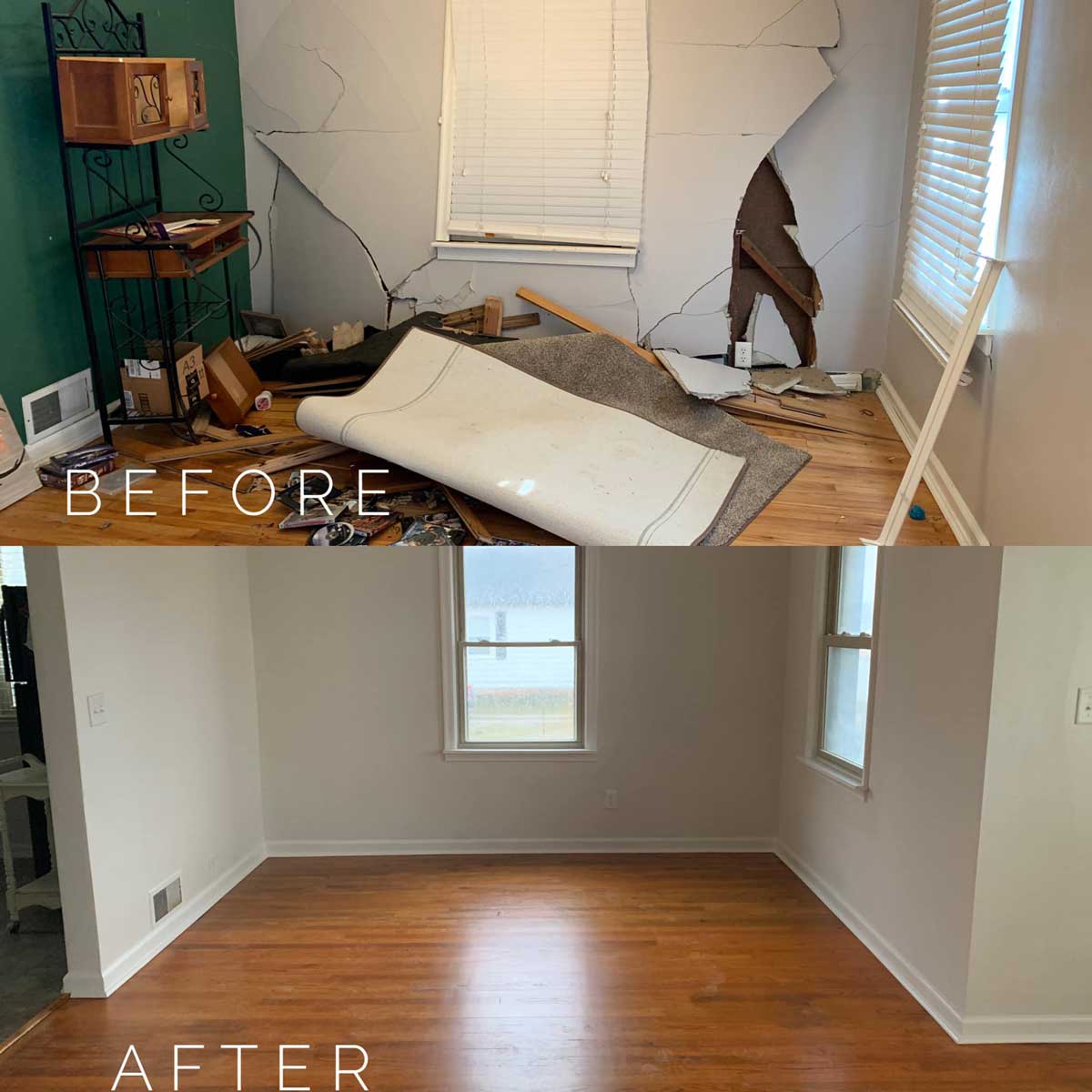 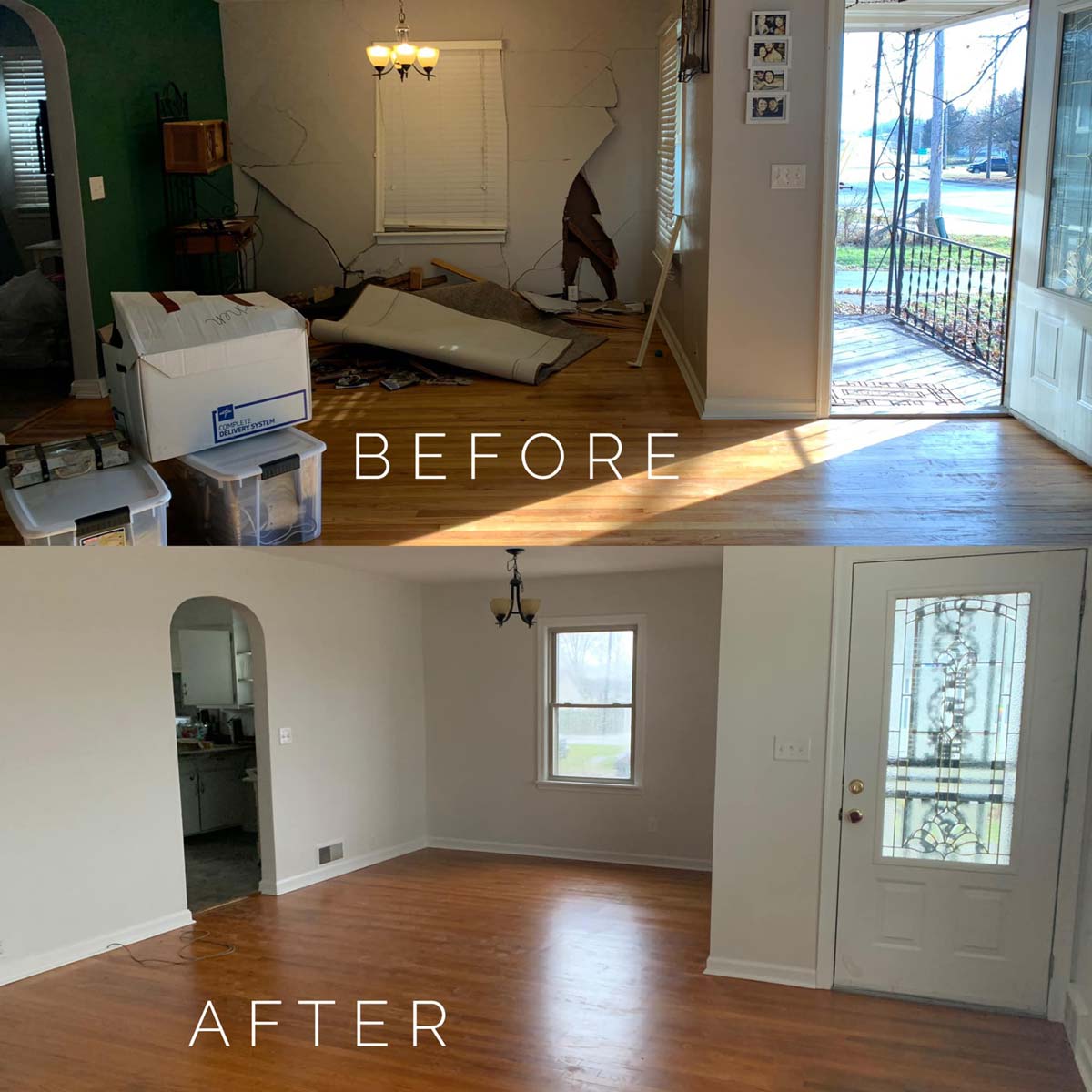 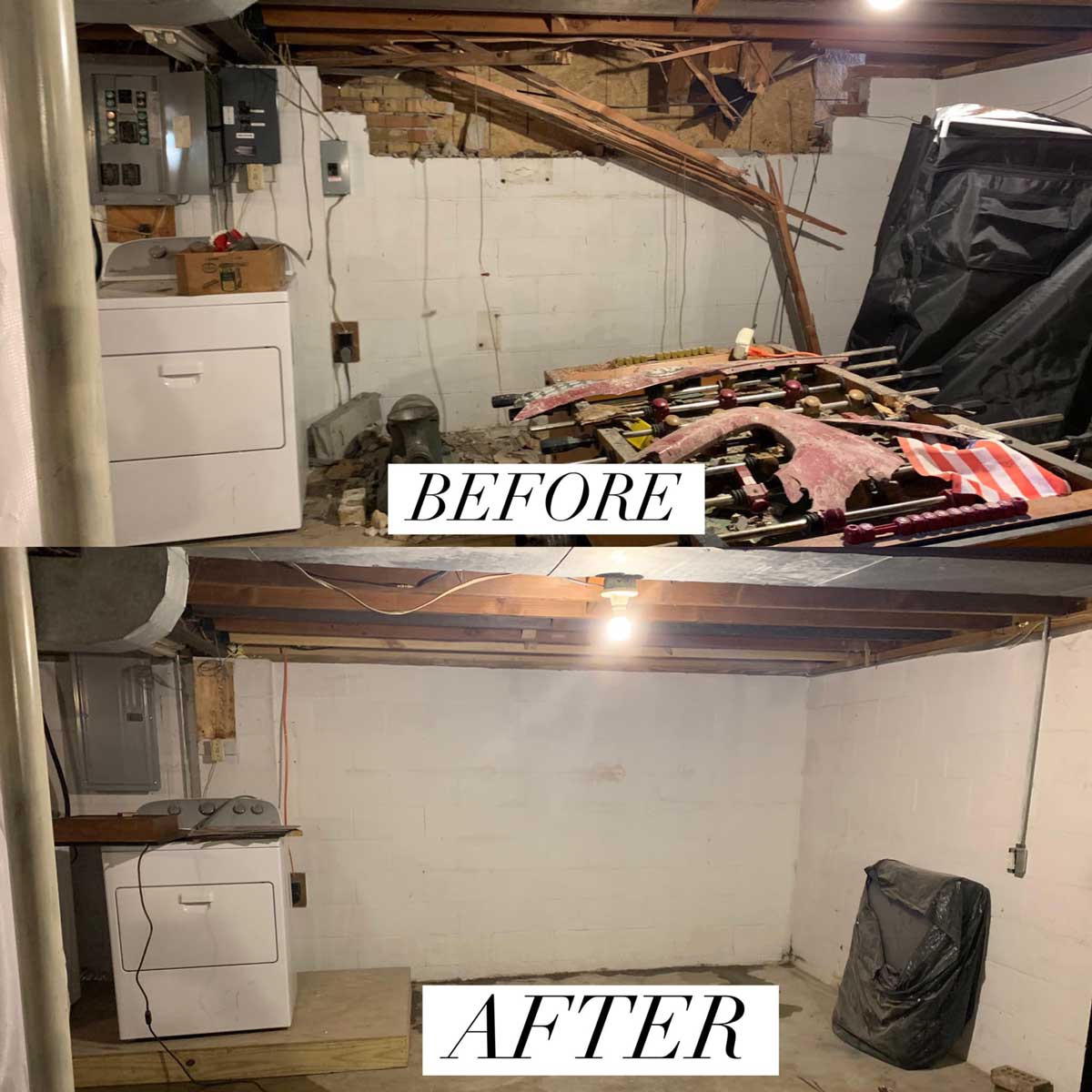 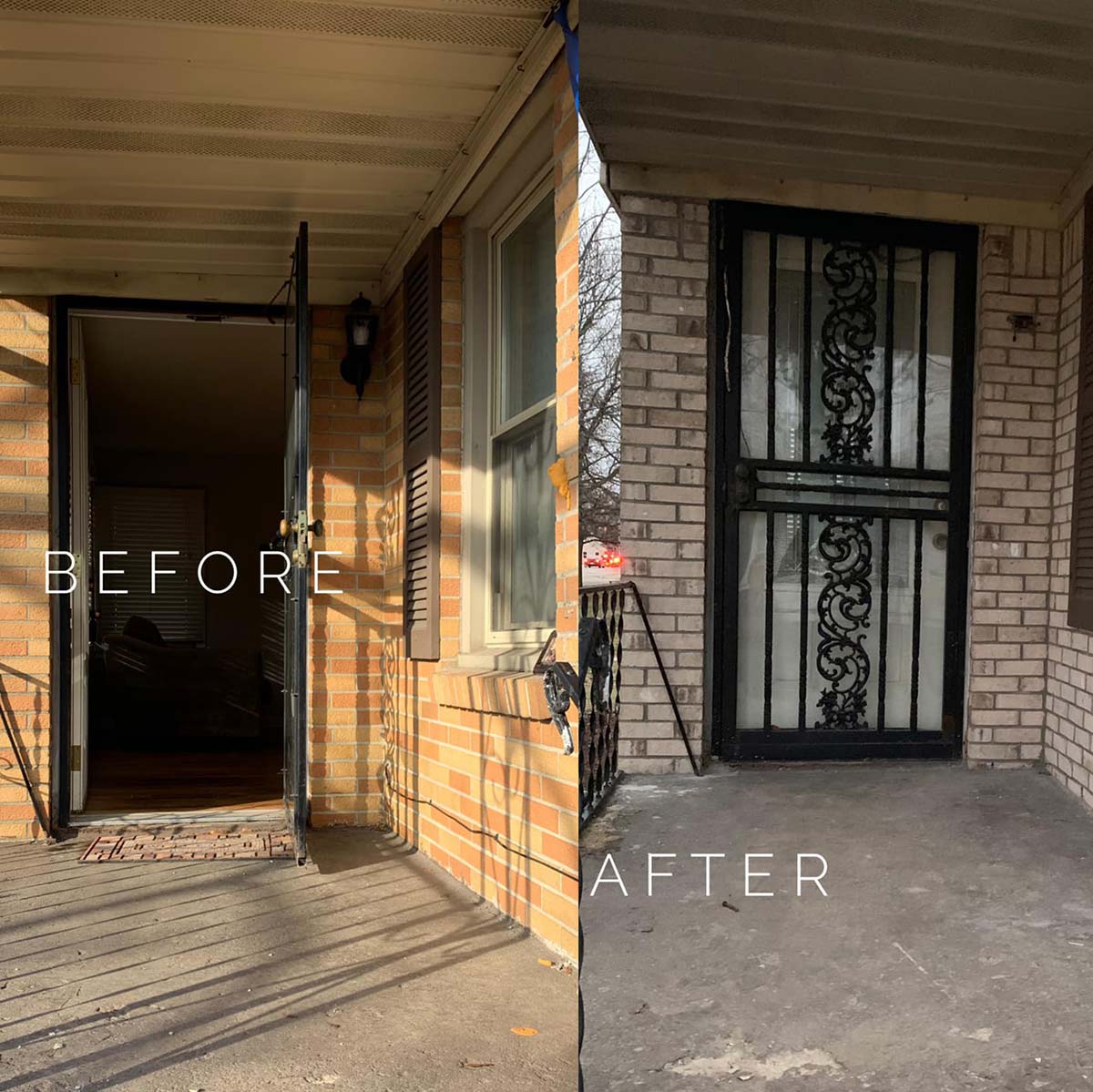 Josh Smalling is here to help.

We pride ourselves in our prompt service and reliability. If your home is in need of restoration, contact us today!